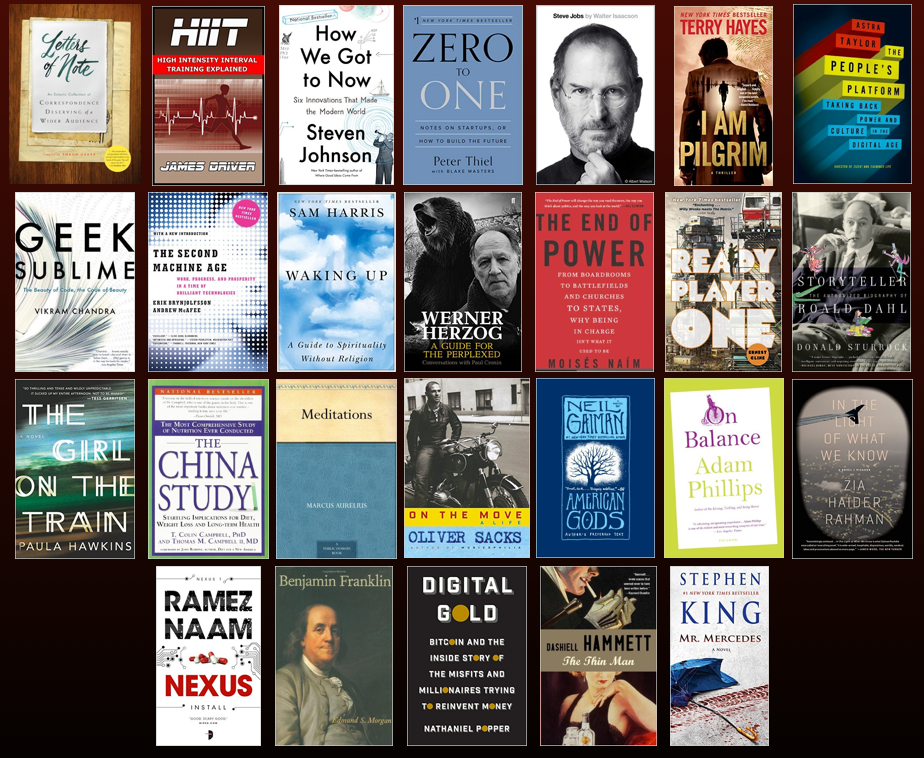 At the beginning of 2015 I made a few small commitments to improve myself. Call them new years resolutions if you wish, however internally I veered away from that label as it is synonymous with failure. No one ever keeps new years resolutions it seems to me. We state them and forget them. To get over that tradition of failure I decided to approach my goals with a product management type focus. So I understood what the problem was, I formulated a plan, I tracked my progress and and measured the outcome. In short I felt I wasn’t reading enough, so I set a reading goal and tracked it in Trello. Geeky but effective.

The goal was to read 25 books. This is probably a 100% increase from the 10-12 book average I managed in recent years. It is a meagre goal for some I know, but for me this represented a challenge and one I felt I could hit. And I am delighted to report that I did. So for no other reason than to revel in the achievement, here is what I read:

Some of these books were real gems. I especially enjoyed Letters of Note, Storyteller (the Roald Dahl biography) and The End of Power. The Steve Jobs book was also fascinating, if not entirely stuff I hadn’t already heard. On the fiction side, I ripped through The Girl on the Train, and was mesmerized by American Gods, and intend to read a lot more by Neil Gaiman. Nexus by Ramez Naam was also brilliant and thought-provoking but I didn’t feel the need to read the next two in the series straight away. Maybe I’ll pick them up in 2016.

On the down-side I thought Steven Johnson’s, How We Got To Now, was the weakest of his books I have read. It felt very lightweight compared to those others I have loved such as Emergence and Future Perfect. Digital Gold was also just like reading a long New Yorker article. I wanted more on the impact of Bitcoin. That’s not to say it wasn’t an enjoyable read, just not what I wanted.

But of them all, the one book that has planted something new and foundational in me is On Balance by Adam Phillips. The book in its entirety grew a little wearisome in the later essays as it dwelled on Freudian, psychoanalytical interpretation. But, the Five Short Talks on Excess were truly fantastic. As someone who has spent his whole adult life striving for balance, especially between work and non-work commitments, these early essays shook me to my core with the simple concept that Balance is perhaps not that desirable:

‘There seems to be something singularly captivating in the word balance,’ John Stuart Mill said in a talk to the Mutual Improvement Society in 1834, ‘as if, because anything is called a balance, it must, for that reason, be necessarily good.

This obvious statement, that balance is not inherently good, was transformative for me. Phillips goes on to show that those “singularly captivating” aspects of our life, those things that are described using excessive, but fundamentally positive, adjectives (captivating, exciting, desirable), unbalance us. Of course it works to the negative side also. But the key is that a life of balance strives to smooth out the very things that make life interesting and progressive. Those things that stir up our passions and drive us forward. When those things that unbalance us enter our lives, it is a sign that something truly matters to us. It is a clue to what makes us tick. So I leave you with this quote, which I read again and again, and is something I now carry with me every day.

It is of some significance that when we talk about many of the things that matter most to us – as the essays in this book on excess, on fundamentalism and on schooling suggest – we soon lose our so-called balanced views. So we should not, perhaps, underestimate our wish to lose our balance, even though it’s often easier to get up than to fall over. Indeed, the sign that something does matter to us is that we lose our steadiness.